November 13, 2019
I became fascinated with the concept of overnight oats when everyone else did - 2015-ish when every cooking blog had how-to's about them.  I settled on about three recipes that we really liked and I used them - some were kind of gross and too rich and sweet for breakfast, i.e. peanut butter and chocolate overnight oats - 'nuff said.

I tweaked the original recipes and came up with a version that is much lower in calories than the original versions, and works with the 5:2 diet plan we're trying to make a go of again.  Overnight oats are easy to assemble the night before - or actually several nights before, I've made them as far as about 5 days in advance and they tasted fine. Also with these tweaks they only set you back about 180 kcals. 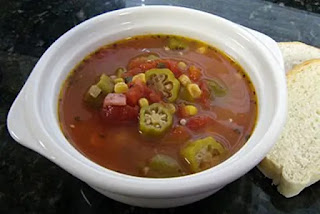 Hey - it's been a minute since my last post, but things are still going well.  I hope to post more in the coming days, weeks, months and years.

I have mentioned before that I have a kitchen garden that I try growing organic vegetables, I have had some luck with it.  Okra is something that grows very well in the $#!%%y mid-Atlantic clay that I have in my Falls Church backyard. Okra also freezes very well, so I have a freezer section that is full of 2 cup (5 oz) portions of okra.

Full disclosure - I LOVE OKRA, and I grew up in the deep South of the US where it is cooked a lot.  Some are put off by the 'slimy' quality that okra can have.  Having grown up with it I don't mind it - I like how it thickens anything it's added to, but some find it off-putting.  You can cut some of this by par-boiling okra for 3 minutes by itself before you add it to anything, but, to me, you may as well just go and make something else. AmIRight?

The best Asparagus Soup I have ever tasted...

So, this recipe was adapted from a recipe for "Slimming Asparagus Soup" that was included in the "Super Shred Diet" book that was all the rage a couple years ago.  It's a terrible name. I never made this when we were on the Shred plan, but I tried this version recently and wanted to share - it's better than I thought it would be.

In a big sauce pan, bring the water, stock base, potatoes and the woody asparagus ends to a simmer, cover and cook until the potatoes are tender -…
Post a Comment
Read more 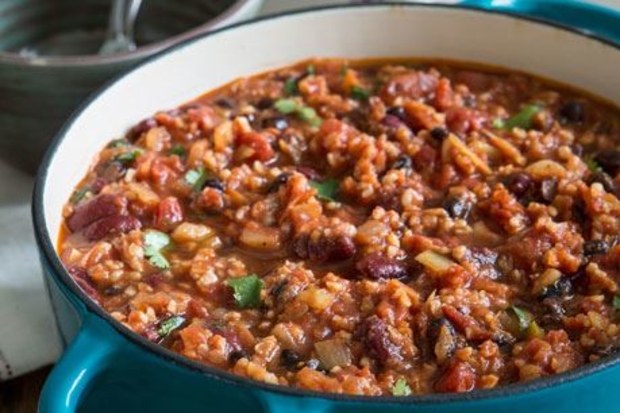 · Long time no post, it's been almost two years!  Tempus sure does fugit, don't it!
This is a vegan chili recipe, that I adapted from one on Epicurious.  One thing that they don't specify in the other recipe is about the bulgar. Bulgar is a wheat groat that has been boiled and dried, it's used a lot in middle eastern and east European dishes.  It has a sort of meat-like quality when it's added to this and other dishes, but if you cook it too long, it gets a bit mealy.  So, cook the 1/2 cup of bulgar, according to the package directions, then just add it at the end.  Bulgar is usually found in the grocery aisle with wild rice, quinoa, spelt, millet and other weird grains.
I am not vegan, but I am really making a concerted effort to consume less meat in my diet.  I am a committed omnivore. Don't judge.
Anyway, I really like this.  The barbeque sauce adds a nice sweetness. 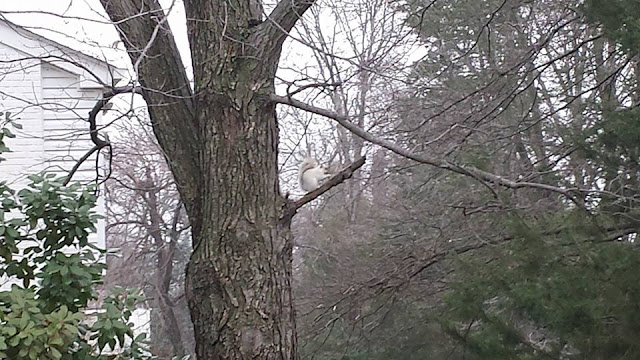 OK, every year for the last several years, my spouse and I have rung in the new year with our dear friends, M and D. About 3 years ago we started including another couple, B and R.  The six of us have season tickets to a local theater company, and always attend a Sunday matinee together then head out for a dinner somewhere afterward.

So the six of us do this collaborative 5-course dinner for New Years Eve. This year I am responsible for the cocktail, the soup course and the seafood course.

The cocktail always poses a quandary, these dinners are an endurance event, wine with each course so you can't get too liquored up during appetizers or  you won't be able to enjoy the rest of dinner!  Let's just say, it's happened.  SO. I want to make something in the Cosmo-family of cocktails but not quite so boozy as a Cosmo - which are usually mixed with mostly vodka and cranberry juice dribbled in for color. 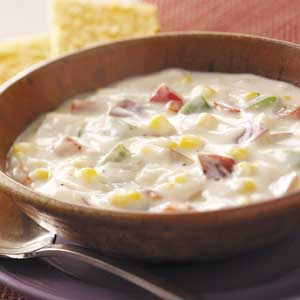 Long time, no post.  I'll try to fix that this year.

This is something to do with leftover ham from Christmas.  It relies on a LOT of convenience items (condensed soups) that I don't use a lot.  These Cream of Whatever soups are fantastic shortcuts in the kitchen, but they tend to be a little heavy on sodium and bland - so you really need to add your own flavors to make the dish special.

In a large skillet or sauce pan:
Melt:
2 tbls butter

Add, Bring to a simmer, and simmer for 20 minutes until the potatoes are tender
3 cups potatoes, diced
4 cups chicken broth

Simmer for another 10 minutes, and the chowder is ready to serve.  However, if your are feeling extravagant, and want to really bump up the comfort-…
Post a Comment
Read more

Lemon Cheese...because Lemon Curd is a little too fussy. 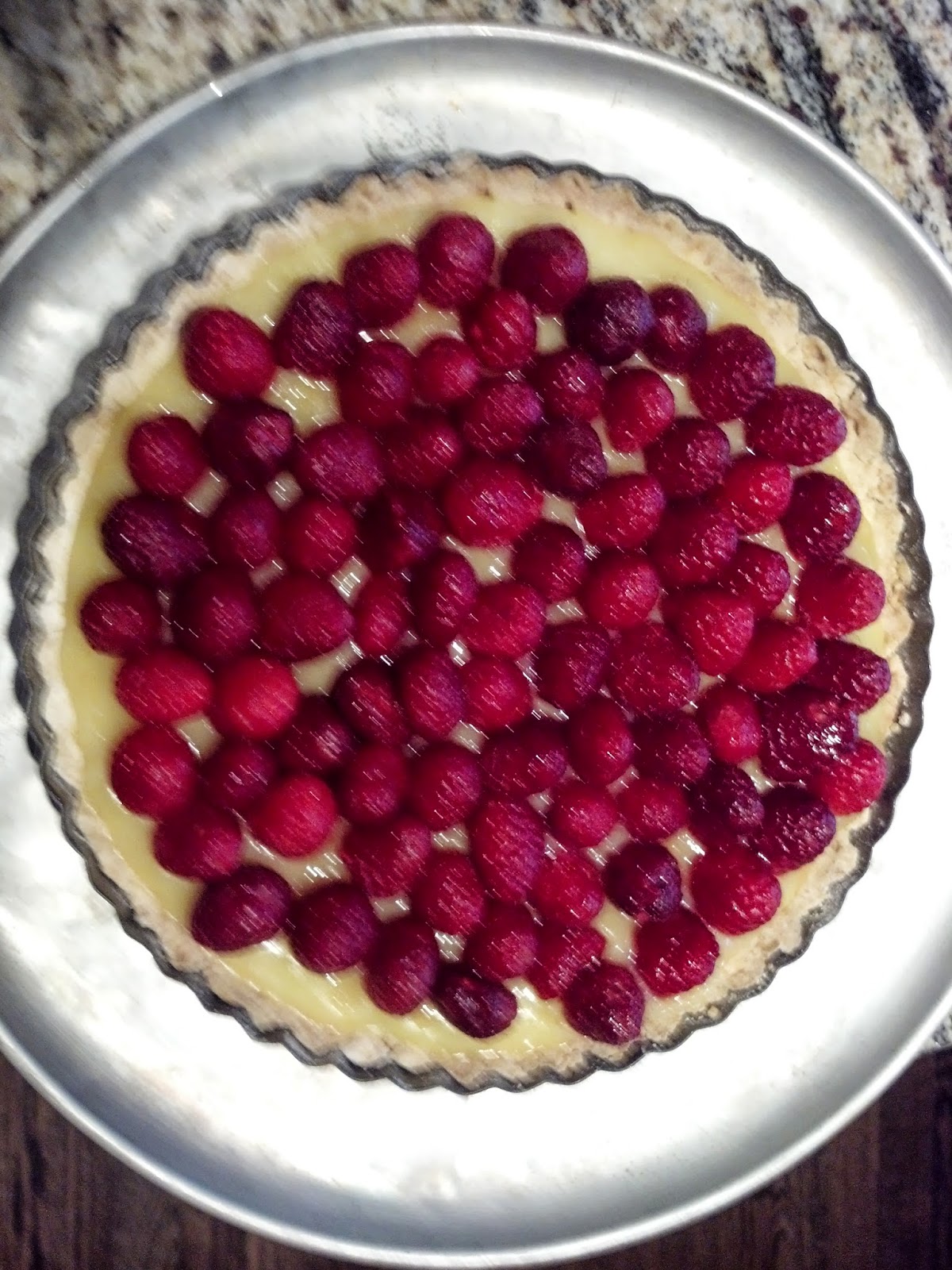 I am sure you are wondering what I filled that awesome Shortbread crust.  Lemon Cheese, of course!  This was adapted from an old Nathalie Dupree cookbook, New Southern Cooking.  I cut it by 1/3 because it's the perfect amount for a 9-inch tart, her's was created for a 12-inch tart crust.  But the great thing about it is that you can adjust up or down depending on how much you need.  The magic ratio is:

Adjust up from there...

Lemon Cheese differs from Lemon Curd in that it's much, much less fussy.  Lemon Curd requires you to separate eggs.  I don't like separating eggs. [I know I did separate an egg in the previous recipe, but that was only one, and I used the white immediately in a quick morning scramble] Lemon Curd usually uses 4 - 8 egg yolks - which means you have to figure out what to do with your 4 - 8 egg whites - not a tragedy, but long after separating eggs I have often come across a container with an…
Post a Comment
Read more
More posts